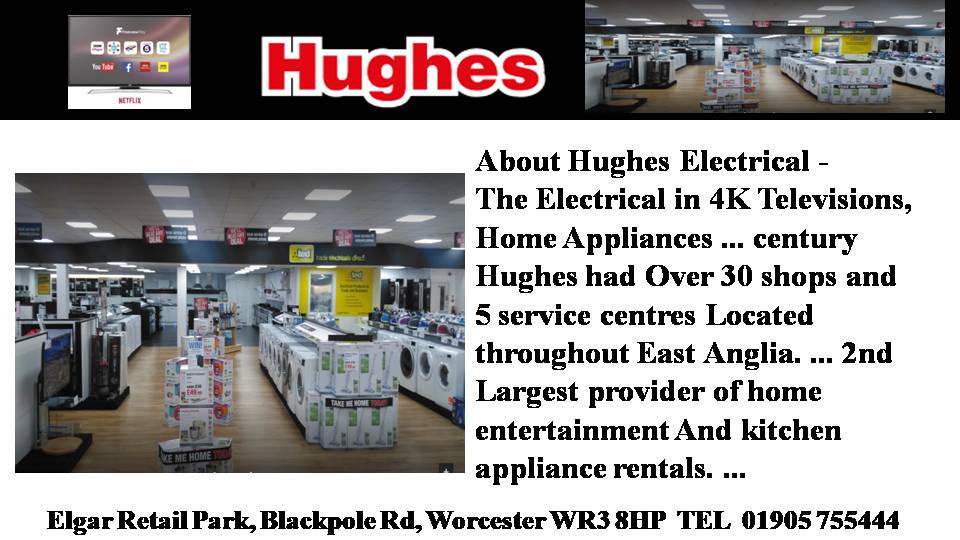 Register your BestBusinesses.co.uk card by clicking on the button below.

Who we are… Hughes was founded in Lowestoft, Suffolk in 1921 by Frank Hughes who trained as an electrical engineer after having served in the Great War. Originally the company rewound industrial electrical motors for Lowestoft’s fishing fleet but in 1928 Frank bought his first shop. Here he built and sold radios and the family literally lived over the shop for many years. The business was incorporated in 1946 but the following year Frank passed away, leaving his children Peter, Phyllis and Jim to take over the management of the company. To this day, almost one hundred years on, Hughes remains a true family business with the third generation under Robert and Jeremy Hughes now at the helm. Hughes were quick to embrace and introduce new technologies as they developed, such as televisions and labour-saving kitchen appliances. By renting these products they became affordable for the typical household in the post-war austerity years. This early equipment was notoriously unreliable and the engineering background of the company meant it was well placed to develop a large service infrastructure to repair them. Geographic expansion soon followed and by the end of the 20th century Hughes had over 30 shops and 5 service centres located throughout East Anglia.
Today
The new millennium bought new opportunities and Hughes expanded its retail footprint still further with the acquisition of Apollo 2000 based in the West Midlands and Bennetts Retail based in East Anglia. These businesses operated from large out of town stores which greatly increased Hughes expertise in the sale of kitchen appliances and IT equipment. This growth has meant that Hughes is now the country’s 4th largest specialist electrical retailer and the 2nd largest provider of home entertainment and kitchen appliance rentals.

Since 2013, we have created a department dedicated to the smart home. Hughes Smart, helps you create your own connected home and understand fully the world of smart products. From lighting and heating, to whole home audio and video, our fully trained team can help you design, plan, install and manage your whole smart home.

Hughes was delighted to win the Domestic and General Internet Retailer of the year award in 2016 having been voted the best electrical website by more than 250,000 customers. The commercial division called Hughes Trade is one of the country’s fastest growing and most respected business to business electrical suppliers. This division was awarded the contract to be the preferred supplier of kitchen appliances to the London 2012 Olympic Games and Glasgow 2014 Commonwealth Games reflecting its gathering success. Hughes has developed a 70,000 sqft distribution facility in Thetford which supports the shops, website, trade and service centres, whilst retaining its commitment to service, with over 100 fully trained electrical engineers. In 2016 Hughes celebrated its 95th birthday. This longevity shows that the company motto of “inspiring customer loyalty through quality customer service” remains as relevant and true today as when Frank Hughes first founded the business, 95 years ago.

Reviews
There are no reviews yet, why not be the first?
Leave a review